Contrary to Elder's first sentence, a survey of 650 climate skeptics at the Heartland climate conference in Las Vegas on July 9 found that not one skeptic denied that humans had some effect on climate. The main issue is that climate models greatly overestimate the effects of greenhouse gas (GHG) emissions, likely by a factor of three. Changes in the greenhouse effect can be measured by satellite. They show low sensitivity to GHG emissions. See here.

Elder starts by explaining the greenhouse effect then says we "challenge" this. In fact, almost all climate skeptics agree with the Intergovernmental Panel on Climate Change (IPCC) estimate of the direct greenhouse effect of CO2. It is the climate system's response to the radiative effects that are in dispute.

Elder falsely writes that warming would cause more turbulent weather. In fact, AGW would warm the exo-tropics much more than the tropics, reducing the temperature differences that drive storms, so global warming reduces storminess. Many studies (see here) confirm that colder climates had more severe storms, and strong tornadoes have been declining over the last 40 years since the 1970's global cooling scare. 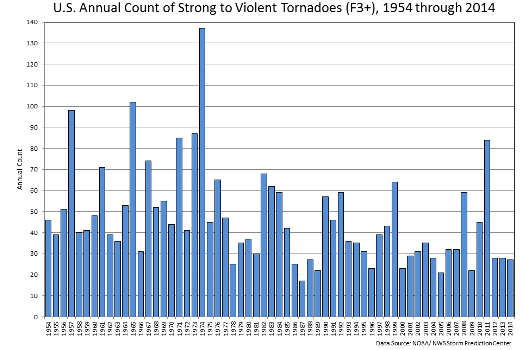 Let 's go point by point of Elder's article. The title of each point below are what Elder claims are skeptics arguments against AGW theory.

1. The earth has been cooling recently.

Since the spiked temperatures of the El Nino of 1998 (a natural, cyclical climate phenomenon) temperatures have been flat despite a rise in carbon dioxide (CO2). From 2002, temperature trends are declining slightly according to both surface based and satellite measurements.

But more significantly, there has been no warming for 16+ years, a period for which climate models forecast a strong warming trend, as indicated in our billboard below.

Elder says this "short-term" pause in warming was caused by natural factors, but fails to note that the there was no recent La Nina or volcanoes to cause cooling, and that the IPCC has been telling us for years that natural factors are tiny compared to AGW. There is only a 1% chance the models are consistent with the observations. Natural cooling has negated AGW.

Climate models are very complex computer programs that try to predict future trends but remember the old computer adage? GIGO garbage in garbage out.   If you feed overestimated assumptions into a computer, you will get wildly wrong extrapolated results that have little resemblance to reality.

Elder points out that much of the heat ends up in the oceans, but fail to note that ocean heat content rise from 2003 was only a third of the projections, which falsifies the climate models. That is just another climate model failure.

This is true. Earth scientists can show you eons of natural warming and cooling cycles. The Minoan, Roman and Medieval Warm Periods are deemed to have been warmer than current temperatures. Greenland ice core data show numerous periods where climate has changed naturally several times more rapidly than during the 20th century.

Solar scientists can point to observable cyclical variations that correspond well with climate cycles on earth. The graph below compares solar activity (thick and dashed lines) to temperatures (light line) over the last 400 years. The graph shows good correlation between solar activity and temperature.

The solar magnetic flux has increased through most of the 20th century causing warming.

The IPCC's mandate is to review the human-induced factors of climate change. ' That means we are getting skewed reports from the alleged climate experts; even the Dutch government is calling for an overhaul of the IPCC to include natural factors. There is no evidence that climate change will increase extinction rates. Animals thrive with warmth. Even polar bear populations have been stable since 1981.

This is true. Many global temperature monitoring locations are stationed on top of black-topped roofs, beside brick walls and near heating outlets in urban centers. Several studies show that correcting the surface temperature record for urban development would reduce the warming trend over land by half, see here. The best objective ' sources we have are satellites which show no warming since 1998, and very little warming prior (satellite data have only been available from the 1979).

Elder says the IPCC has made "occasional misstatements" citing the error about Himalayan glaciers in the 4th report. IPCC officials later admitted the error and explained they knew it was wrong but left it in the report anyway to exert political pressure. It wasn't an occasional mistake. The report includes numerous errors including errors about African agriculture, Amazon rainforests, Dutch geography, Antarctic sea ice, hurricane activity and many more. The 5th report issued in September 2013 also includes numerous errors. It blames the 'pause' in temperatures on volcanoes, but volcanic aerosols were very low compared to earlier decades, which would have contributed to warming. It says the certainty of AGW has increased while the discrepancy between models and observations grow ever larger.

Elder gives an anonymous quote about snowy weather and falsely implies skeptics commonly pick isolated weather event to argue against AGW. We argue that weather is not climate. Alarmists commonly claim each storm is related to AGW. Skeptics point to the huge discrepancies between models and global observations.

Atmospheric scientist Dr. Judith Curry testified to the US Senate on January 16, 2014 that people suffer from weather amnesia ' and presented evidence showing that weather was much worse in the 30 's, 50 's and 70 's.   Curry pointed out that the evidence of the IPCC report of Sept 2013, shows that the case of anthropogenic global warming is weaker, that carbon dioxide (CO2) is likely not the knob ' on climate variability because temperatures have stagnated while CO2 levels rose, and that the IPCC has no reasonable explanation as to why their AGW theory is not working. See here. More CO2 should equal warming, according to the theory. That 's just not happening because natural forces are more powerful than human-emissions and activities.

Our scientific adviser, atmospheric scientist Madhav Khandekar, last year published The Global Warming Extreme Weather Link , see here, that presents evidence of no rise in extreme weather. Hurricane energy has declined by 40% from 1998 to 2012, and shows no correlation to global temperatures.

6. Warming will be good for us

The world's most comprehensive integrated assessment model produced by  Dr. Richard Tol of Sussex University, U.K. shows that the 20th century warming increased world economic output by 1.4%, and if warming resumes, will increase to 1.5% by 2025. That is an annual benefit of $1.2 Trillion now, with further benefits in the future. Add to this the benefits of CO2 fertilization. CO2 is plant food which increases crop yields, providing an additional benefit of $0.2 Trillion.

In his closing, Elder launches into catastrophic predictions, all of which are shown to be wrong by the evidence. Again we point readers to the scientific evidence, not the eco-hype.

Elder expects "major shifts in precipitation" but these is no evidence of that. The IPCC latest report (TS.6.4 page 115) says, "Multi-model results for precipitation indicate a generally low predictability."

Elder is scared about increasing methane, but every IPCC forecast of methane has grossly wrong with the observations below all of the uncertainty ranges.

Atmospheric methane has risen by a tiny 0.2%/year over the last 10 years.  The IPCC says there is "low confidence and little consensus on the likelihood of a clathrate methane release over the 21st century." (TS page 70). Despite these atrocious errors in their previous methane forecasts, they now forecast methane to increase 6 times faster by 2050 than the recent observations.

The rise in the air 's CO2 content is causing a great greening of the Earth. This map shows the estimated changes in vegetative cover due to CO2 fertilization between 1982 and 2010. The satellite observations, analyzed to remove the effect of variations in precipitation, show that foliage cover across warm and arid environments has increased by 11% due to fossil fuel usage. This is hugely beneficial to animal life.

The evidence is that global warming stopped naturally 16+ years ago, despite a rise in carbon dioxide.   Climate models predicted a global temperature rise from 1998 that was 16 times the actual satellite observed temperature rise so the models are extremely wrong and should not be used for setting public policy or driving mass global warming hysteria. People have been frightened by fear of global warming which stopped before Kyoto was ever ratified.

Green groups and ENGOs have driven global warming hysteria as a means of gaining members and raising money. Our calm and rational scientific evidence isn 't quite as compelling as the threat of imminent catastrophe, is it? Humans are strongly influenced by the crowd ' and fear of imminent danger.

Elder also tells us there is an overwhelming scientific consensus ' on AGW there is no such thing. See our evidence-based deconstruction of the consensus ' in our report 97%? NO! Global Warming Math Manipulations and Social Proofs.  here. There 's no 97% consensus; they 're fooling you.

A recent paper by Cook et al claimed to have found a 97% consensus by reviewing 11,944 abstracts of technical climate papers. This is actually the fraction that imply or agree than humans have some effect on climate, which includes all climate skeptics. In fact, the paper's ratings of the abstracts show that only 0.5% explicitly state that humans cause more than 50% of the warming from 1950. The IPCC claims that 98% of the warming was human caused.

In our scientific view, the sun is the main direct and indirect driver of climate change. Not you or CO2.